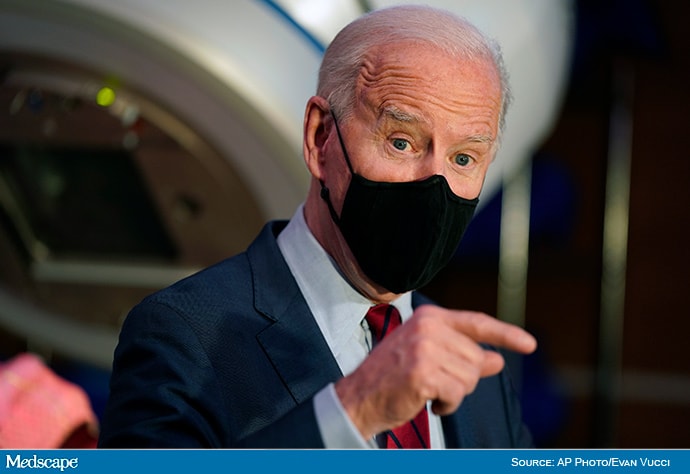 President Joe Biden speaks during a tour of the James Cancer Hospital and Solove Research Institute, Tuesday on the campus of The Ohio State University in Columbus, Ohio.

COLUMBUS, Ohio (AP) — President Joe Biden pledged Tuesday that his $1.9 trillion rescue package would build on the promise of the Affordable Care Act (ACA), the hallmark legislation of Barack Obama’s presidency that became law 11 years ago.

Biden’s COVID-19 relief law pumps up “Obamacare” premium subsidies to address long-standing problems of affordability, particularly for people with middle-class incomes. More taxpayer assistance means, in effect, that consumers who buy their own policies through HealthCare.gov will pay hundreds of dollars less out of their own pockets.

“We have a duty not just to protect it, but to make it better and keep becoming a nation where healthcare is a right for all, not a privilege for a few,” Biden said at the James Cancer Hospital in Columbus, Ohio. “Millions of families will be able to sleep a little more soundly at night because they don’t have to worry about losing everything if they get sick.”

Biden’s speech in the capital of a political battleground state is part of a mini-blitz by the White House to highlight the relief package. Newly minted Health and Human Services Secretary Xavier Becerra will echo Biden’s comments Tuesday in Carson City, Nevada, and join a Florida-themed Zoom event. Second gentleman Douglas Emhoff will pitch the aid in Omaha, Nebraska.

Yet events interrupted the push, as Biden needed to also address a mass shooting in Boulder, Colorado, that left 10 people dead. He spoke about the shooting and need for background checks before leaving for Ohio. And while touring a cancer center in Columbus, Biden was asked if he had the political capital to move forward on new gun control measures.

“I hope so,” said Biden, crossing his fingers. “I don’t know. I haven’t done any counting yet.”

On healthcare, the numbers suggest that consumers’ fears about medical costs could be eased by the new rescue package.

The COVID-19 legislation cuts premiums paid by a hypothetical 64-year-old making $58,000 from $1,075 a month to about $413, based on Congressional Budget Office estimates. A 45-year-old making $19,300 would pay zero in premiums as compared with about $67 on average before the law. People who have even a brief spell of unemployment this year can get a standard plan for no premium and reduced copays and deductibles.

“The ACA is over a decade old and this is literally the first time that Democrats have been successful at improving it,” said analyst Larry Levitt of the nonpartisan Kaiser Family Foundation. “Democrats have succeeded politically by selling the ACA’s protections for preexisting conditions, but affordability has always been a challenge. And now Democrats have successfully improved the premium help available under the law.”

New and existing customers will be able to take advantage of the savings starting April 1 by going to HealthCare.gov. States that run their own health insurance markets will offer the same enhanced assistance, although timetables for implementation may vary.

The administration announced Tuesday that people will now be able to enroll for subsidized HealthCare.gov coverage until August 15, an extension of 3 months. Biden has opened up the health insurance markets as part of his coronavirus response.

The Centers for Medicare & Medicaid Services, which runs the insurance markets, also said that additional savings for people who’ve been dealing with unemployment will be available through HealthCare.gov starting in early July. The richer subsidies were incorporated in the COVID-19 relief bill.

By spreading the word about the higher subsidies, the White House is hoping to super-charge enrollment. But the 11 million people who already have private plans through the health law will also benefit.

Republicans see Biden’s sweeter subsidies as an example of Democratic overreach on the COVID-19 bill. Policy consultant Brian Blase, a former healthcare adviser in the Trump White House, expects most of the additional taxpayer assistance will merely substitute for what private households would have otherwise paid.

Their complaints notwithstanding, Republicans may face a political dilemma. The higher healthcare subsidies are keyed to the pandemic and expire by the end of 2022. That will let Democrats set up election-year votes to make the new benefits permanent, or add even more.

The COVID-19 bill follows Biden’s strategy of building on the Obama-era health law to move the US toward coverage for all.

Another provision offers a dozen or so holdout states led by Republicans a financial inducement to expand Medicaid to more low-income adults. So far there have been no takers.

It’s unclear how big a dent the Biden legislation will make in the number of uninsured people, which has risen to an estimated 33 million or more. But it represents the biggest expansion of federal help for health insurance since the ACA’s enactment.

Most children with viral croup are most contagious during the first days of fever and illness.Source: iStock Facts you should...