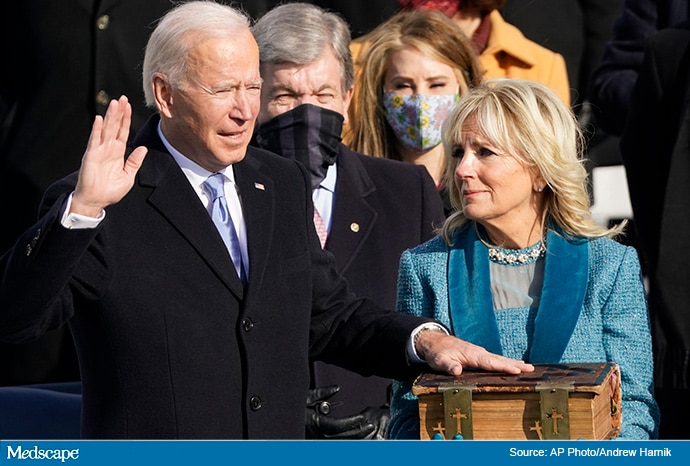 Today’s inauguration of President Joseph Biden and Vice President Kamala Harris was filled with messages of hope and unity, promises of a way out of the country’s economic and pandemic crises, and performances by A-list celebrities. Lady Gaga maneuvered the Capitol steps in a gigantic red skirt to sing the national anthem, and the day featured performances from Jennifer Lopez and Garth Brooks.

But never far from the thoughts and remarks was the memory of the Jan. 6 insurrection at the Capitol and a resolve to repair the nation’s divides.

“I will be a president for all Americans,” Biden said in his inauguration address. “I promise you I will fight as hard for those who did not support me as those who did.” He pleaded for Americans to set aside their differences and to start afresh.

That goal was echoed in remarks by Sen. Roy Blunt, R-Missouri, who said: “The assault on our Capitol reminds us that a government designed to check itself is both fragile and resilient.” The day is an opportunity for unification not division, he said.

In her remarks, Sen. Amy Klobuchar, D-Minnesota, stood on the Capitol steps and said, “We rededicate ourselves to its cause.”

“My whole soul is in this, bringing America together,” Biden said in his inaugural address. He urged Americans to end “this uncivil war” pitting Republicans against Democrats, urban against rural. “I understand many view the future with fear and trepidation.” He brought up a memory of his own father, worried about providing for his family. “I promise you: I get it.”

In the days leading up to his inauguration, Biden announced a $1.9 trillion plan to alter the course of the pandemic, and he announced the experts, many world-renowned, that he has tapped to lead that effort.

Biden takes office on the first anniversary of the first US case of the coronavirus infection being discovered. Since then, more than 24 million Americans have been infected with the coronavirus, according to Johns Hopkins University, and more than 400,000 have died.

Biden says science will play a starring role in his administration. “We are going to lead with science and truth,” then President-elect Biden said on Jan. 16 while he and Vice President-elect Harris announced key members of the science team. “We believe in both. This is how we are going to, God willing, overcome the pandemic and build our country back to better than it was before.”

Public health and other experts are applauding his choices, especially the decision to elevate the position of director of the Office of Science and Technology Policy (OSTP) to Cabinet-level. Established by Congress in 1976, the OSTP is meant to provide the president and others with advice on a host of topics: the scientific, engineering, and technological aspects of the economy, national security, homeland security, health, foreign relations, the environment, and the technological recovery and use of resources.

Eric Lander, PhD, is Biden’s nominee for the OSTP director, an office now elevated to the higher position after years of what Biden considers a too-low profile. Lander was a principal leader of the Human Genome Project, credited with helping develop ways to discover the molecular basis of disease. He is also president and founder of the Broad Institute of MIT and Harvard, a renowned nonprofit biomedical research institute. During the Obama administration, Lander was co-chair of the President’s Council of Advisors on Science and Technology.

Francis Collins, MD, will remain as the director of the National Institutes of Health, a position he’s held since 2009 after a long tenure at the NIH’s National Human Genome Research Institute. He will continue to play a pivotal role in the response to the pandemic.

At the science team announcement, Biden told his nominees that he is asking them to focus on five areas:

In announcing the science team, Biden said: “These are among the brightest, most dedicated people not only in the country, but the world.”

According to media reports, Biden plans to sign many executive orders promptly after taking office, including rejoining the Paris climate accord. The international treaty has a goal of limiting global warming. As president, Donald Trump withdrew the US from the agreement. Biden is also expected to stop Trump’s plan to leave the World Health Organization.

Biden has already announced several nominees to key health agencies, including Xavier Becerra, attorney general of California since 2017, as secretary of health and human services, and Rachel Levine, MD, a transgender woman, to be assistant secretary for health. Levine, if confirmed by the Senate, would be the first openly transgender federal official in a Senate-confirmed role.

Vivek Murthy, MD, who was surgeon general under President Barack Obama, will fill the same position for Biden, and Rochelle Walensky, MD, a professor of medicine at Harvard Medical School and chief of the Division of Infectious Diseases at Massachusetts General Hospital, will serve as CDC director. Anthony Fauci, MD, will be Biden’s chief medical adviser on the pandemic.

Former FDA Commissioner David Kessler, MD, has been asked to head up Operation Warp Speed to get the population vaccinated against COVID-19.

Biden’s team will not just focus on the pandemic. Addressing cancer will be a key priority for Biden and Harris — a political and personal issue for both. It’s expected to be a signature issue for the incoming first lady, Jill Biden. Biden’s son Beau died of brain cancer at age 46, in 2015. Joe Biden headed the Cancer Moonshot, a national effort to end cancer, when he was vice president under Obama.

In a statement, she says: “President-elect Biden — like many Americans — has a deep personal connection to cancer that spurs his strong commitment to biomedical research. Specifically, the Cancer Moonshot Initiative, which he spearheaded, continues to be an incredible source of opportunity and new discovery for cancer researchers across the country. With an estimated 1.9 million people expected to be diagnosed with cancer this year, the need to work with President-elect Biden and his administration to see what we can do together to accelerate the pace, progress and equitable access to cancer research and innovations is urgent.”

Praise for the Picks

Experts outside the administration lauded Biden’s choices. “We have a president who respects science and will be guided by it,” says bioethicist Arthur Caplan, PhD, director of medical ethics at the NYU Langone Medical Center. He singled out naming Kessler as head of Warp Speed, among other good choices. “He’s absolutely handing the reins to a Captain Kirk kind of person,” he said, citing Kessler’s experience and positive outlook.

Making the OSTP director a Cabinet-level position, Caplan says, lends “a strong voice not just for the vaccine, but for testing, masking, and making the kinds of public health changes we are going to need over the next few months.”

In a statement, the Association of American Medical Colleges says: “The AAMC commends President-elect Biden for elevating science to a national priority by elevating the Presidential Science Advisor [the OSTP director] to a Cabinet level position and selecting immensely qualified and experienced leaders to guide the administration’s science policy decisions. From fighting the COVID-19 pandemic to addressing health disparities to developing medical treatments and diagnostics, an evidence-based approach to policy must direct the way forward on the nation’s health challenges.”

Science and Medicine for All

As the pandemic has disproportionately affected communities of color, the issue of distrust of the vaccine by some people of color is often discussed, with some public health experts wondering if Biden’s efforts will be adequately tailored to meet the needs of those groups.

But Gary Puckrein, PhD, president of the National Minority Quality Forum, a nonprofit research and education organization devoted to ending health disparities, sees it in a more positive light. “I think he’s put together an amazing team,” he says. “He has chosen people who have dedicated their life to science.” While he acknowledges that distrust exists in minority communities, he also says: “We have to take the vaccine. We have to bring the virus under control. The only way we do that is to take the vaccine.”

Despite the distrust, Puckrein says, “Everything I see about this administration says to me that he is making an effort to create a community that is safe for everybody.”

Biden has also named Yale researcher Marcella Nunez-Smith to lead a new task force on racial disparities in healthcare, including the COVID pandemic.

The panel’s work will continue after the pandemic as the Infectious Disease Racial Disparities Task Force.