“I Dropped from a Heart Attack and Died” | Nutrition Fit

In 2018, Blake Gauthier was reminded that life can change in a heartbeat. The 6-foot-7-inch Gauthier—who weighed 530 pounds at the time—literally dropped dead of a heart attack while walking down the street. Fortunately, he was brought back to life in time to realize that life is too short and too precious to take for granted.

Two years and more than 200 lost pounds later, Gauthier has the heart of a 20-year-old and the body to back it up. His heart attack could have taken everything away. Instead, as he describes in his story of transformation, it gave him everything he needed to change.—H.E.

At my heaviest, I weighed over 530 pounds. I am 6-foot-7, so I’m not a small guy by any means, but it’s still no excuse. A couple of years before that, I was in fairly good shape. That was before I decided to renovate the houses my girlfriend and I lived in and sell them.

Instead of doing the smart thing and working on them one at a time, we decided to do both at once. That meant we didn’t have a kitchen to use, which is what caused the weight gain. Everything just kind of snowballed until I dropped dead.

I Did What Any Guy My Age Would Have Done: Ignored the Warning Signs

I won’t lie. There were some warnings that something was going to happen. I’d walk up a flight of stairs and get to the top hanging onto the walks and feeling like my heart was beating out of my chest, which in hindsight was a clue. But I figured I was OK. I’ll ignore it, and it’ll be fine.

One day I was walking down the street with my girlfriend at the time—who, luckily for me, was a nurse—and all a sudden, I couldn’t catch my breath. I remember reaching out to grab onto the wall of a building. Next thing I knew, I was in an ambulance. They had just brought me back after dying from a heart attack.

About two days later, I was strapped to this table in a crucifix position. There was a big TV screen next to me and I could see this little thing on the screen going toward a beating heart. I realized that it was actually my heart, and they were going in through my wrist and trying to get out a blood clot. It was quite the wake-up call. 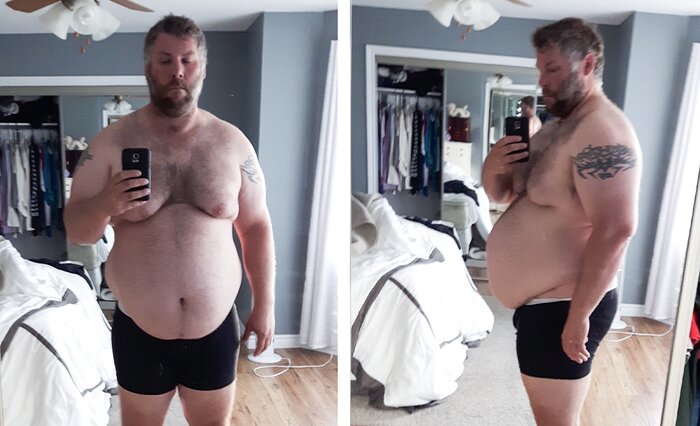 I Thought My Life Was Over

I tore my ACL and my MCL when I fell, which hampered my recovery a little. I was flat on my back on the couch for six months trying to get my heart to heal. I started ordering in any possible kind of fast food you can imagine. I started drinking, as well. I was going through almost a case of beer a day.

The more I drank or the more I ate, the more depressed I got. It became a very vicious cycle. The worst part for me was I had been fairly athletic before, but the aftermath of the heart attack and the depression that followed took me down. That was the hardest thing for me. I thought my life was over, even though I had been brought back for a second chance.

I was talking to my daughter one day and listening to her tell me how much she missed me kind of snapped me back to reality. I realized that if I wanted my daughter to have a father when she got older, I had to make some serious changes.

I Had to Get Off the Couch

When I hung up the phone, I grabbed my crutches and forced myself to get up off the couch. I walked to the end of the backyard and back to the house, which was maybe 80 feet in total. I was worn out by the time I got back to the house, but I decided that I was going to do that every day. Then I started trying to make it two times in a day.

At first, I couldn’t even climb a flight of stairs without feeling like my heart was going to explode. Then, little by little, I started to make more small changes. Instead of driving to the corner store, I would walk. Instead of ordering in, I started making my own food and getting back on a healthier meal plan. Gradually, the weight started to come off.

In a little over a year on my own, I dropped almost 170 pounds. At that point, I realized I wanted to take it to the next step. I hired a personal trainer, Josh DeMelo, who became my coach. I’ve been training with him for a year now.

I’ve lost almost another hundred pounds, and I’ve put on a significant amount of muscle. This transformation has had me changing every single aspect of my life, from getting up in the morning to working out to eating to making healthy choices, both mentally and physically. I’ve started telling people, I’m half the man I used to be, but I’m also twice the man I was. 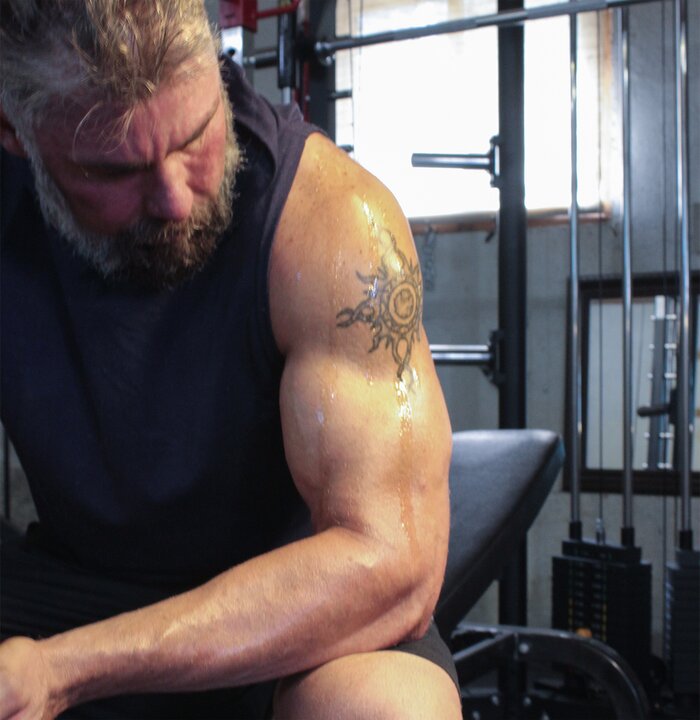 A memory came up on social media about six months ago. I was actually able to get on a stationary bike and make a full revolution on the pedals. That was just a year and a half ago. Now, I’m working out in the gym for an hour and a half, two hours, every day, not including the cardio sessions. So, it’s just amazing what your body is capable of doing when you put in the work.

The Heart of a Champion

After I lost 200-plus pounds, I went to see a plastic surgeon for skin removal surgery. Because of my previous heart issues, they had me do an electrocardiogram, and I remember the surgeon calling me himself to go over the results. The first thing I thought was, “Oh, no, they found something. All this work I’ve been doing is for nothing.”

Instead, the doctor said, “I’m looking at your EKG, and according to what I’m looking at, there’s no damage at all to your heart. You have the heart of 20-year-old.” It made me realize that all this work I had been putting in had paid off. Any damage that had been done by my weight gain and poor eating habits had been reversed.

If I Can Do This, Anyone Can

A journey of 1,000 miles starts with the first step. As a child I grew up watching wrestling on TV and in movies like “Pumping Iron.” Stepping onstage was something that I always wanted to do. I wanted that kind of look, and I wanted to follow in the footsteps of my heroes, like Hulk Hogan, Arnold Schwarzenegger, and Lou Ferrigno.

When I was on the couch recovering from my heart attack and weighing over 500 pounds, never in my wildest dreams did I think I’d be preparing for a bodybuilding show. But each step I took over the past two years brought me to this point.

Now, I’m lifting heavier and I’m eating almost 4,000 calories a day. It’s a little strange because for years I was watching that number go down on the scale, and now it’s coming back up. I have to remind myself that this is just the next part. It’s a little scary watching the number slowly creep back up, but it’s a good thing.

One thing that’s really nice is I have been sharing my story online through Instagram and Facebook. I’ve had a lot of people reach out to me saying, “Hey, I lost 20 pounds after seeing your story, and you’ve inspired me to do this.” 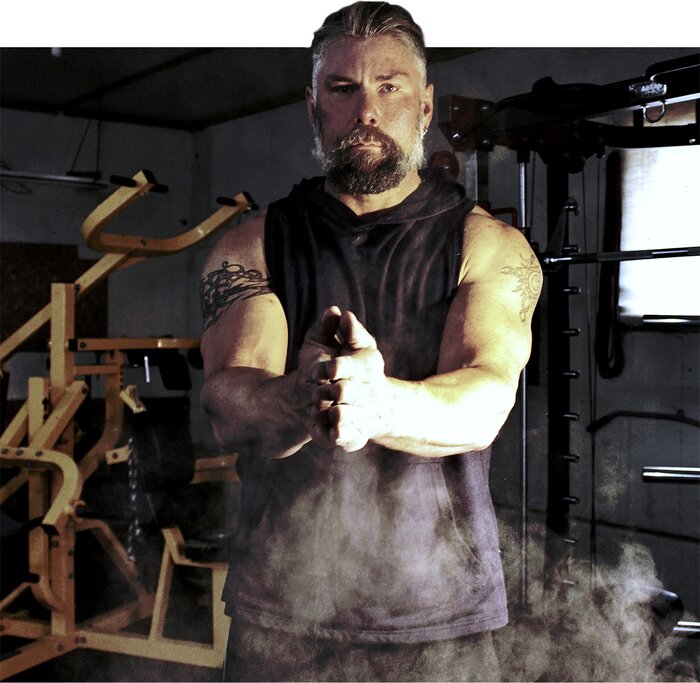 I would show people pictures of what I used to look like, and they’d say, “Oh, my God, I didn’t even recognize you!” It’s surreal. I have to pinch myself to realize this is actually happening. I remember as a kid picking up the muscle magazines and looking through them thinking, “These people are Greek gods. I’ll never look like that.” And now we’re actually working toward me getting on a bodybuilding stage.

READ  The New Science Of Size And Strength | Nutrition Fit

If I ran into the man I was before, I’d tell him, “Don’t give up, no matter what happens.” There were some very dark times a couple of years back, and I’m so glad that I pushed myself to where I am now. To anyone else who has been where I’ve been, just know that if you want something, it’s there as long as you work for it.

I had the mindset that if I didn’t eat the right way, the healthy way, I’d be back in that ambulance at nighttime. Maybe they wouldn’t be able to bring me back. That made it pretty easy to stick to a healthy meal plan.

2. Get Back to Healthy Basics

The foods I relied on to lose weight were chicken and rice, Greek yogurt, and cottage cheese. They were pretty much the staples I had been raised on and always enjoyed that I was getting back to instead of ordering a Baconator.

One of the hardest things for me was when I starting to do more intense cardio. Most athletes look forward to that feeling of your heart pumping and knowing you’re pushing yourself. I’d been through the heart attack. That was actually quite scary for me for quite a while, so I had to kind of back off a little bit and take it easier.

5. You Don’t Always Have to Be Positive

To find a workout plan for your own transformation, check out BodyFit. If you want to share your success story with us to be considered for publication, send an email to​​​​ transformations@bodybuilding.com.

The best people to study the Astral Plane are serious scientists who are often skeptics. It is a reality, yet...