He also noted that the ddcfDNA test detects rejection “weeks to months before biopsy can. I anticipate that this test would be used to guide physicians to treat patients earlier for rejection than biopsy would,” said Agbor-Enoh.

The study was published online January 13 in Circulation. 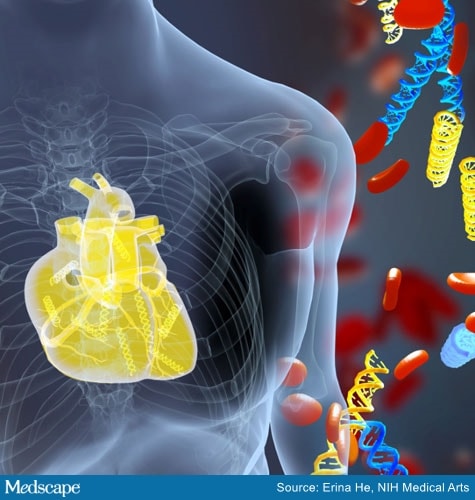 Through sequencing and single nucleotide polymorphism assessment, ddcfDNA fragments can be easily identified and quantitated. The percentage of ddcfDNA (%ddcfDNA) indicates the amount of ddcfDNA compared with the total cfDNA found in blood.

In earlier work, the researchers showed that %ddcfDNA increased with allograft rejection and decreased after treatment.

This validation study included 165 cardiac transplant patients followed for a median of 17.7 months with endomyocardial biopsies and ddcfDNA measurements.

Median levels of %ddcfDNA were high after heart transplant surgery (2.83%), decayed to 0.13% by 28 days after transplant, and increased again in the setting of acute rejection. Patients with acute rejection showed 13-fold higher %ddcfDNA than peers with mild to no rejection (0.38% vs 0.03%; P < .001).

The rise in %ddcfDNA was detected 0.5 and 3.2 months before histopathologic diagnosis of ACR and AMR, respectively. The area-under-the-receiver-operator characteristics curve (AUROC) for %ddcfDNA to detect ACR and AMR was 0.92.

The test performed best from day 28 on. Starting 28 days after heart transplantation, use of the liquid biopsy with a ddcfDNA threshold of at least 0.25% had “excellent sensitivity and specificity for diagnosis of rejection, safely avoiding 81% of all surveillance endomyocardial biopsies,” the investigators report.

Agbor-Enoh noted that tissue biopsy typically shows “advanced stages of rejection when significant organ injury has occurred.” This liquid biopsy is “more sensitive and detects injury early, when injury is still at a molecular stage, well before the biopsy shows signs and well before the patient shows any symptoms of rejection.”

The ddcfDNA test, in contrast, is “quite reliable between operators and between labs. So, if one lab reads out a positive test, a second lab is likely to produce the same results,” Agbor-Enoh told Medscape Medical News.

“A typical biopsy schedule includes up to 14 biopsies during the first year of transplant and frequent biopsies for several years thereafter. Therefore, a blood test for rejection could eliminate the need for repetitive biopsies,” said Colvin, a member of the Council on Clinical Cardiology of the American Heart Association.

Colvin noted that, in this study, %ddcfDNA “performed well, with an AUROC of 0.92 and a negative predictive value of 99%. It was able to distinguish between acute cellular rejection and antibody-mediated rejection and to detect allograft injury earlier than the biopsy.”

Funding for the study was provided by National Heart, Lung and Blood Institute Division of Intramural Research and by an American Heart Association/Enduring Hearts Foundation Scientist Development Grant. Agbor-Enoh and Colvin have no relevant disclosures.

Summary: Major surgery can trigger different patterns of cognitive alterations depending on previous presence, or absence, of Alzheimer’s pathologies.Source: IOS...