Before COVID, postural orthostatic tachycardia syndrome (POTS) was one of those diseases that many people, including physicians, dismissed.

The cryptic autonomic condition was estimated to affect one to three million Americans before the pandemic hit. Now case reports confirm that it is a manifestation of post-acute sequelae of SARS-CoV-2 infection (PASC), or so-called long-haul COVID.

“I’m excited that this condition that has been so often the ugly stepchild of both cardiology and neurology is getting some attention,” said Taub. She is hopeful that the National Institutes of Health’s (NIH’s) commitment to PASC research will benefit patients affected by the cardiovascular dysautonomia characterized by orthostatic intolerance in the absence of orthostatic hypotension.

Postinfection POTS is not exclusive to SARS-CoV-2. It has been reported after Lyme disease and Epstein-Barr virus infections, for example. One theory is that some of the antibodies generated against the virus crossreact and damage the autonomic nervous system, which regulates heart rate and blood pressure, Taub explained.

It is not known whether COVID is more likely to trigger POTS than are other infections or whether the rise in cases merely reflects the fact that more than 115 million people worldwide have been infected with the novel coronavirus, according to those Medscape spoke with. 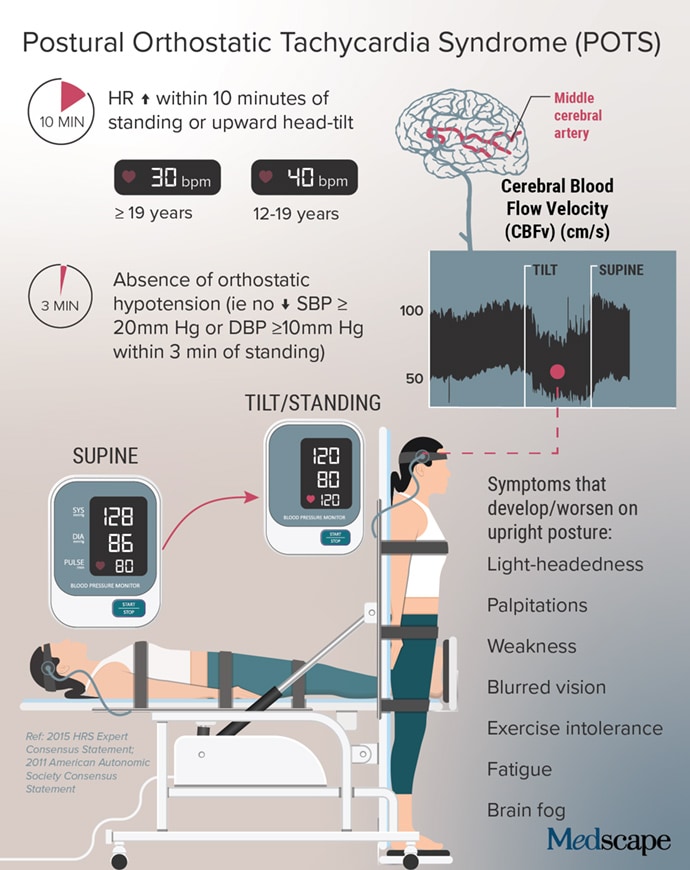 Low blood volume, dysregulation of the autonomic nervous system, and autoimmunity may all play a role in POTS, perhaps leading to distinct subtypes, according to a State of the Science document from the NIH, the National Heart, Lung, and Blood Institute, and the National Institute of Neurological Disorders and Stroke.

In Taub’s experience, “The truth is that patients actually have a mix of the subtypes.” Kamal Shouman, MD, an autonomic neurologist at Mayo Clinic, Rochester, Minnesota, told Medscape that he has seen patients present with post-COVID POTS in “all flavors,” including “neuropathic POTS, which is thought of as the classic postinfectious phenomenon.”

Why Does It Mostly Affect Athletic Women?

The condition, which can be the result of dehydration or prolonged bed rest, leading to deconditioning, affects women disproportionately.

If a patient with POTS who is not a young woman is presented on medical rounds, Manesh Patel, MD’s, response is, “Tell me again why you think this patient has POTS.”

Patel, who is chief of the Division of Cardiology at Duke University School of Medicine, Durham, North Carolina, has a theory for why many of the women who have POTS are athletes or are highly active ― they likely have an underlying predisposition, compounded by a smaller body volume, leaving less margin for error. “If they decondition and lose 500 cc’s, it makes a bigger difference to them than, say, a 300-lb offensive lineman,” Patel explained.

That hypothesis makes sense to Taub, who added, “There are just some people metabolically that are more hyperadrenergic,” and it may be that “all their activity really helps tone down that sympathetic output,” but the infection affects these regulatory processes, and deconditioning disrupts things further.

Women also have more autoimmune disorders than men. The driving force of the dysregulation of the autonomic nervous system is thought to be “immune mediated; we think it’s triggered by a response to a virus,” she said.

Shouman said the underlying susceptibility may predispose toward orthostatic intolerance. For example, patients will tell him, “Well, many years ago, I was prone to fainting.” He emphasized that POTS is not exclusive to women ― he sees men with POTS, and one of the three recent case reports of post-COVID POTS involved a 37-year-old man. So far, the male POTS patients that Patel has encountered have been deconditioned athletes.

POTS is typically diagnosed with a tilt test and transcranial Doppler. Taub described her “poor man’s tilt test” of asking the patient to lie down for 5 to 10 minutes and then having them stand up.

She likes the fact that transcranial Doppler helps validate the brain fog that patients report, which can be dismissed as “just your excuse for not wanting to work.” If blood perfusion to the brain is cut by 40% to 50%, “how are you going to think clearly?” she said.

Shouman noted that overall volume expansion with salt water, compression garments, and a graduated exercise program play a major role in the rehabilitation of all POTS patients.

He likes to tailor treatments to the most likely underlying cause. But patients should first undergo a medical assessment by their internist to make sure there isn’t a primary lung or heart problem.

“Once the decision is made for them to be evaluated in the autonomic practice and [a] POTS diagnosis is made, I think it is very useful to determine what type of POTS,” he said.

With hyperadrenergic POTS, “you are looking at a standing norepinephrine level of over 600 pg/mL or so.” For these patients, drugs such as ivabradine or beta blockers can help, he noted.

Taub recently conducted a small study that showed a benefit with the selective If channel blocker ivabradine for patients with hyperadrenergic POTS unrelated to COVID. She tends to favor ivabradine over beta blockers because it lowers heart rate but not blood pressure. In addition, beta blockers can exacerbate fatigue and brain fog.

A small crossover study will compare propranolol and ivabradine in POTS. For someone who is very hypovolemic, “you might try a salt tablet or a prescription drug like fludrocortisone,” Taub explained.

Another problem that patients with POTS experience is an inability to exercise because of orthostatic intolerance. Recumbent exercise targets deconditioning and can tamp down the hyperadrenergic effect. Shouman’s approach is to start gradually with swimming or the use of a recumbent bike or a rowing machine.

Taub recommends wearables to patients because POTS is “a very dynamic condition” that is easy to overmedicate or undermedicate. If it’s a good day, the patient is well hydrated, and their standing heart rate is only 80 bpm, she tells them they could titrate down their second dose of ivabradine, for example. The feedback from wearables also helps patients manage their exercise response.

For Shouman, wearables are not always as accurate as he would like. He tells his patients that it’s okay to use one as long as it doesn’t become a source of anxiety such that they’re constantly checking it.

With increasing attention being paid to long-haul COVID, are there any concerns that POTS will get lost among the myriad symptoms connected to PASC?

Shouman cautioned, “Not all long COVID is POTS,” and said that clinicians at long-haul clinics should be able to recognize the different conditions “when POTS is suspected. I think it is useful for those providers to make the appropriate referral for POTS clinic autonomic assessment.”

He and his colleagues at Mayo have seen quite a few patients who have post-COVID autonomic dysfunction, such as vasodepressor syncope, not just POTS. They plan to write about this soon.

See also  Can A Contact Lens Really Get Lost In Your Brain?

“Of all the things I treat in cardiology, this is the most complex, because there’s so many different systems involved,” said Taub, who has seen patients recover fully from POTS. “There’s a spectrum, and there’s people that are definitely on one end of the spectrum where they have very severe diseases.”

For her, the important message is, “No matter where you are on the spectrum, there are things we can do to make your symptoms better.” And with grant funding for PASC research, “hopefully we will address the mechanisms of disease, and we’ll be able to cure this,” she said.

Tricia Ward is an executive editor at Medscape. She has written about science and medicine for both consumer and healthcare professional audiences for various publications. Follow her on Twitter @_triciaward.