Among patients with acute ischemic stroke, treatment in a mobile stroke unit (MSU) is associated with better functional outcome at 90 days, compared with standard management by emergency medical services (EMS).

“More widespread deployment of MSUs may have a major public health impact on reducing disability from stroke,” James C. Grotta, MD, director of stroke research at the Clinical Institute for Research and Innovation at Memorial Hermann-Texas Medical Center in Houston, said in a press release. “Although MSUs are costly to equip and staff, they reduce the time to treatment. We also expect that more treatment via MSUs can reduce the need for downstream utilization of long-term care.”

The findings were presented at the International Stroke Conference (ISC) 2021.

An MSU is an ambulance equipped with a portable CT scanner, a point-of-care laboratory, and teleradiology and teleneurology capabilities. These vehicles are designed to allow onboard staff to diagnose ischemic stroke quickly using CT scanning and CT angiography, and actually administer tPA while en route to the hospital. 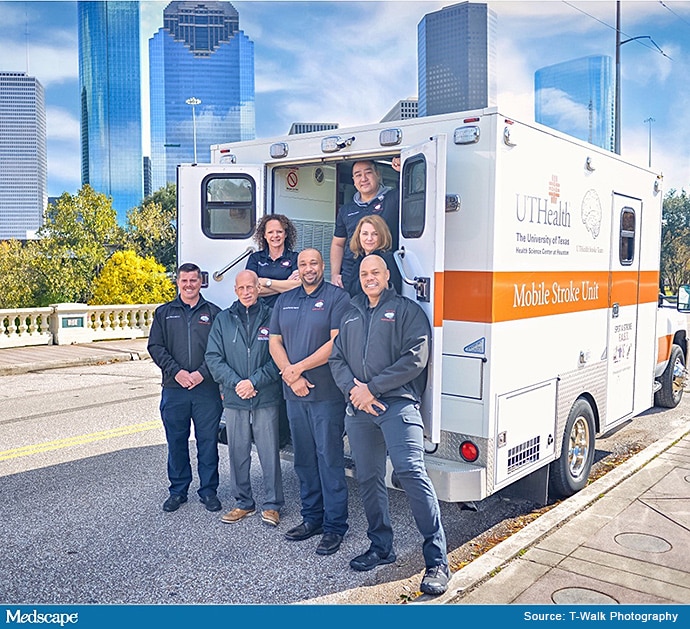 A University of Texas Health Science Center Mobile Stroke Unit. The study presented at ISC showed that patients were treated more quickly in the MSU than with standard management.

In the ongoing BEST-MSU study, the researchers are comparing prehospital diagnosis and treatment in an MSU vs standard EMS management for patients with suspected ischemic stroke. They hypothesized that treatment in an MSU would reduce disability at 90 days and reduce healthcare utilization.

The study is being conducted at sites in Houston; Aurora and Colorado Springs, Colorado; New York City; Indianapolis; Los Angeles and Burlingame, California; and Memphis.

Grotta presented the results for participants’ 90-day outcomes. They analyzed data for 1047 patients with ischemic stroke who were eligible for tPA between 2014 and 2020.

Patients could not be randomly assigned in the field, so they were allocated to an MSU or standard management by EMS according to their week of presentation. In either case, the study team met the emergency personnel on site to determine whether the patient would qualify for the study. The analysis included 617 patients treated in an MSU and 430 receiving standard management.

The primary outcome was utility-weighted modified Rankin Scale (mRS) score at 3  months. The utility-weighted mRS reinterprets the mRS, a traditional measure used in stroke trials, according to patients’ perception of their disability, said Grotta during a press conference.

In addition, the proportion of patients who were both deemed eligible for tPA and received treatment was approximately 79% with standard management and approximately 97% in MSUs.

“Some of that was due to patients on the standard management group not getting treated within 4 ½ hours, but most of it was due to the fact that physicians in the emergency room were probably less inclined and willing to treat patients with tPA than vascular neurologists staffing the mobile stroke unit,” Grotta said.

“So, putting this into perspective, if you treated 100 patients with a mobile stroke unit rather than standard management, 27 will have less final disability, and 11 more will be disability-free, achieving a Rankin score of 0 or 1,” Grotta concluded.

The researchers will be looking at data related to health utilization over the subsequent year among these patients, and those findings are expected to be reported later this summer, Grotta noted. “And from that we’ll be able to look at cost-benefit and other issues that are important.”

One problem with this approach currently, though, is reimbursement for services delivered in MSUs. In a separate paper presented at the meeting, Kenneth Reichenbach Jr, MSN, Lehigh Valley Health Network, Allentown, Pennsylvania, and colleagues including Grotta surveyed 20 MSU programs across the United States about reimbursement on behalf of the Prehospital Stroke Treatment Organization (PRESTO).

Nineteen programs responded to the survey. Of these, only one defined its overall financial performance as positive, and 100% rely either partly or entirely on grants, philanthropy, or institutional support to sustain the program, the researchers reported.

See also  How To Protect Yourself From Coronavirus Disease (COVID-19) By Using Disinfectant Water Machine?

“Reimbursement is the next big issue we have to address,” Grotta told Medscape Medical News. The average reimbursement for MSU service is $500, but it costs approximately $2500 per shift to staff the MSU and pay its overhead costs, he added. The annual cost is approximately $875,000.

The current data indicate that at least 10 of every 100 patients treated in an MSU ultimately will have no disability. “The direct costs to the healthcare system per stroke are about $200,000,” said Grotta. “Let’s assume we save just half of that or $100,000 for each of those 10 ‘reversed’ patients. That would be a cost savings of $1,000,000 to the healthcare system to offset the $875,000 cost to sustain the MSU. So, I think we would have a convincing argument.”

An alternative approach to the cost analysis is to measure the cost per quality-adjusted life year (QALY) or year free of disability that a patient gains. If the 10 above-mentioned patients gain two additional QALYs as a result of MSU treatment, the cost per QALY is less than $50,000, which is considered cost-effective, said Grotta.

The study was supported by the Patient-Centered Outcomes Research Institute and the American Heart Association. Grotta has provided consulting services to Frazer, a provider of MSUs and ambulances.