Nine oncologists have filed a lawsuit against the Anne Arundel Medical Center (AAMC), in Annapolis, Maryland, alleging that the hospital fired them and refused to renew their privileges because it chose profit over the needs of cancer patients. 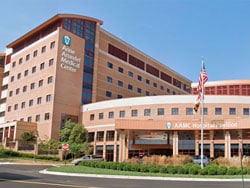 The hospital, however, says that the nine oncologists quit because they had a more profitable opportunity, and it denies any wrongdoing.

AAMC is a private, nonstock, not-for-profit corporation that operates a large acute care hospital in Annapolis, Maryland. It is affiliated with Luminis Health, the parent company of the medical center.

Until October 23, 2020, the nine oncologists were employed by AA Physician Group.

The nine doctors “are highly respected, board certified oncologists and hematologists, with regional and, for some, national reputations in their medical specialty. The oncologists have had privileges at AAMC for many years and their capability as physicians is unquestioned,” according to the court filing made on behalf of the oncologists.

The filing also notes that AAMC is the only hospital within a 15-mile radius and that it serves as the regional hospital for the greater Annapolis area and for many Eastern Shore communities, whose hospitals do not offer various specialty services, such as oncology care, that AAMC provides.

Harriet Cooperman, the attorney who is representing the physicians in the litigation, told Medscape Medical News that the nine plaintiffs “were the oncologists who were providing inpatient services at the hospital.

“Then about 2 or 3 years ago, the hospital and the medical group started saying that medical oncology is unprofitable and is costing them money, and the oncologists became concerned, especially when the hospital started instituting cost-saving measures.”

These cost-saving measures were carried out without collaboration or discussion with the oncologists, Cooperman said. “One thing the hospital did was eliminate a lab that was dedicated to cancer care — not exclusively, but it was where all of the patients went,” she told Medscape Medical News. “This caused a lot of inconvenience to the patients, and they were upset.”

The oncologists were concerned about AA Physician Group’s inadequate support of its cancer program and the increasing financial constraints that the medical center had imposed on oncology services, Cooperman continued. At the same time, they learned that there was a possibility that they could join a private practice, Maryland Oncology Hematology, which did not have a presence in Anne Arundel County.

“The oncologists were looking at this situation…. [T]he hospital is upset because we’re costing them money, but if we were in a private practice, that would remove the expenses from the hospital while still leaving us able to care for patients,” she said. “The hospital wouldn’t have to pay their salaries or have chemotherapy costs, and the practice would have their own infusion center — so maybe this could work for everybody.”

The nine oncologists submitted a proposal for a new way of working. Their intention was to provide a model that would improve the delivery of quality patient care and drug therapies through a partnership with a third-party oncology group. “It was presented in early April 2020, and the doctors wanted to sit down with the president of Luminis Health and have a meeting,” Cooperman said. “But he refused to meet with them, so they put the proposal in writing, and after he read it, he determined that the doctors were resigning.”

The AA Physician Group responded to the proposal on April 23. They notified the oncologists that their employment was being terminated effective at the close of business on October 22, 2020. Hospital privileges for three of the oncologists were terminated from October 2020 through January 31, 2021 (the dates differ because of different terms in employment agreements).

Cooperman filed a temporary restraining order on January 25 on behalf of the oncologists to prevent their hospital privileges from being terminated. This was denied in February. Applications to renew these privileges have been rejected.

Without those privileges, the physicians would be unable to visit their patients who were hospitalized, to consult with the tumor board, or to use the transfusion center, Cooperman explained.

READ  Everything We Thought We Knew Was Wrong | Nutrition Fit

The oncologists are also seeking “compensatory and consequential damages in an amount in excess of $75,000.00, plus punitive damages, pre-judgment interest, post-judgment interest, costs, and such other and further relief,” according to the court filing.

The hospital and the healthcare system view the situation differently.

As reported by the Capital Gazette, Todd M. Reinecker, attorney for Luminis Health, denied the allegations in the lawsuit. He wrote that the oncologists had resigned during the height of the coronavirus pandemic to “pursue lucrative contracts” with a “major pharmaceutical distribution” company.

“The doctors anticipated Luminis Health would be unable to recruit new physicians and be forced to continue to use their services,” he wrote. The medical center hired seven new oncologists to replace them.

Medscape Medical News reached out to Reinecker but did not receive a response.

Medscape Medical News also reached out to the Luminis Health Anne Arundel Medical Center (LHAAMC). A spokesman gave the following statement: “We are pleased with the expertise of our seven new oncologists, as well as the continuity of care we have ensured for our patients as part of our non-profit mission. This dispute started after nine oncologists left their employment to join a for-profit organization. We tried repeatedly to remain aligned with them.”

The statement continues: “LHAAMC continues to be there for all patients, regardless of their ability to pay or who their doctor is. We understand the close relationship that cancer patients have with their oncologists, and want to reassure them they can continue with their current oncologists or one of our new oncologists and still receive trusted care from LHAAMC. Our mission is, and always will be, serving this community.”

Tori Bayless, chief executive officer at Luminis Health, wrote a commentary about the situation, which was published in the Capital Gazette on March 7.

Bayless wrote that she wants to assure the community and current cancer patients that there have been no disruptions in care, inasmuch as questions had recently been raised about “our cancer program and the oncologists who left to join Maryland Oncology Hematology, which is associated with McKesson, a Fortune 7 healthcare giant.”

Bayless explained that hospitalists direct most of the inpatient care, and they are in constant communication with other healthcare providers to ensure the best treatment possible. Cancer patients can continue with their current oncologists or with one of their new oncologists and continue to receive care from LHAAMC. Patient care is “coordinated by our doctors who regularly collaborate with oncologists from other health systems,” she said.

The CEO also states that LHAAMC had tried to “align” with the nine oncologists when they “gave notice last April they were leaving.” But she adds that “they chose to pursue a new career opportunity with Maryland Oncology Hematology, a decision we respect.”

The lawsuit filed by the nine oncologists has been through arbitration. Cooperman said they are waiting for a response. The arbitrator expects to issue a decision on April 2.

“The issue before the arbitrator is the enforceability of the non-compete provision in their employment agreement, which attempts to prohibit the oncologists from working in the geographic area that includes the hospital,” she said. “It is our position that the agreement is overly broad and thus unenforceable.”

The arbitration decision will not resolve the question regarding privileges, she pointed out. “The issue of whether the hospital can withhold privileges is not before the arbitrator, so that would need to be decided by the court,” Cooperman said.

“The hospital wanted to make it seem that the doctors were greedy, and that’s not the case at all,” she said. “What led them to start looking at other alternatives was their concern of the loss of interest in the oncology program, reduction of nursing staff, the closing of the lab — these are all fine doctors, and they could have gone anywhere, but that really wasn’t their goal.”

The independent data and safety monitoring board (DSMB) overseeing the AstraZeneca vaccine trial notified the National Institute of Allergy and...