For Orthodox Jewish communities in New York City and surrounding areas, the pandemic experience started with Purim. The holiday is usually joyous, commemorating the salvation of Jews from an evil annihilation plot. It is a time of celebrations, weddings, and even imbibing alcohol. In 2020, Purim took place on March 10, as COVID-19 cases were first being widely reported.

Alarmed, physicians from Orthodox Jewish communities along the East Coast formed a WhatsApp group with other physicians, in consultation with both public health and rabbinical sources. They warned against Purim festivities and offered guidance to their communities for risk mitigation during the many rituals practiced by observant Jewish.

Avi Z. Rosenberg, MD, PhD, a renal pathologist and researcher at Johns Hopkins University Hospital, Baltimore, Maryland, joined the group early on. “We formed a coalition to collect physicians who were interested in being frontline doctors to the community to figure out how we were going to use our community resources…recognizing that we behave differently as a community.”

Although the pandemic has been a disruption for people from all walks of life, it has affected Orthodox Jewish communities in unique ways. Physicians who are part of those communities have been working nonstop to keep members safe while helping them observe their many sacred rituals and traditions. Although the challenges may be specific to their community, the doctors’ methods and successes may provide examples for those helping other groups.

That WhatsApp coalition currently includes more than 200 physicians from around the United States and other parts of the world. During the pandemic, those physicians have guided their communities regarding the observation of holidays, from Passover in April through the High Holy Days — including Rosh Hashana and Yom Kippur — in September and the sacred weekly Shabbat (Sabbath). Rituals such as weddings, Bar Mitzvahs, funerals, brises (ritual circumcisions), mikvahs (ritual baths attended monthly by women of childbearing age), and daily minyans (services that include a minimum of 10 men) have all had to be modified in significant ways to ensure safety. “Davening [praying] three times a day, life cycle events…. It’s a contact sport,” said Rosenberg.

The doctors in the WhatsApp group — whom some have dubbed the “Jewish Faucis” ― share information and experiences, support each other in combating misinformation, and conduct community-based research. In conjunction with public health authorities, they’ve worked with Jewish medical organizations, including the medical assistance organization Bikur Cholim and the emergency medical service Hatzalah, which have pivoted their activities toward pandemic relief.

This collaboration is important, Rosenberg said, because “it’s very hard for departments of health to fully understand the social demographic that is unique to our community.” Now, as COVID-19 vaccines are rolling out, the physicians are preparing to meet that complex challenge as well.

“We’ve Been Stricter Than the CDC”

Perhaps no individual is better positioned for the work at hand than Aaron E. Glatt, MD. He is chair of the Department of Medicine at Mount Sinai South Nassau, Oceanside, New York, chief of infectious diseases, and the hospital’s epidemiologist. He also serves as assistant rabbi at the Young Israel synagogue of Woodmere, New York. Community members address him as “Rabbi Doctor Glatt.”

In early 2020, after receiving countless emails, texts, and calls early on about the novel coronavirus, Glatt began holding weekly Zoom updates on Saturday nights after sundown, when Shabbat is over. He’s still doing so, although now less often. Many of his videos are posted on YouTube. “I get a lot of requests from across the US and around the world. I try to answer as best as I possibly can,” Glatt said.

The guiding principles during the COVID-19 pandemic, he said, are essentially the same for those practicing any religion: “To do it in a way that allows the religious needs to be met and make sure that the safety of the congregants at the same time is at the forefront.” He stresses that the community has worked to maintain all essential Jewish practices while adhering to the key tenet that “the saving of a life is paramount.”

Because Orthodox Jews don’t use technology on Shabbat — from sundown Friday to sundown Saturday — or holidays, those services must take place in person. Even on other days, a 10-man minyan must also gather in person, although others can join via Zoom on non-Shabbat and on days other than holidays.

For in-person worship, “Everyone is masked, mouth and nose, and the seats are marked where you can and can’t sit, so they’re distanced…. We’ve been much stricter than the CDC [Centers for Disease Control and Prevention] or other organizations in terms of our gatherings for religious needs,” Glatt said. 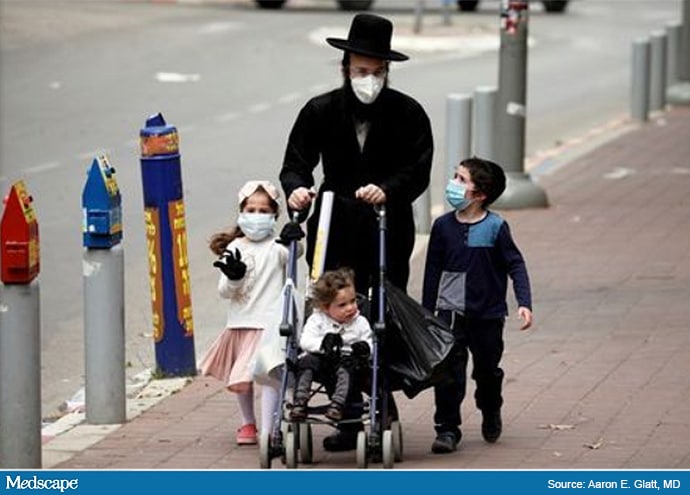 In April, Passover seders, which are usually conducted with large groups of people inside homes, were mostly restricted to family members living in the household. Other rituals have required specific mitigation protocols, such as the mikvah, a ritual bath in which women of childbearing age go every month after their menstrual periods. Capacity has been reduced, women must wear masks except when dunking under water, and some of the preparatory steps are now performed at home. Attendees are screened for symptoms, and rapid testing is conducted where available. As always, the water is chlorinated.

“Where things can be done in a different way that’s acceptable, we certainly opted for that,” Glatt said. “Where things had to be changed and still comply with religious requirements and guidelines, we did that.”

The bris, or ritual circumcision of an 8-day-old baby boy, is typically celebrated with a large group of family and friends. Rosenberg, who is also a mohel — a Jewish person trained in the procedure and in the blessings — said that since March, “I haven’t done a bris with more than a handful of people present, most of the time just family members who live under that roof.”

READ  One in Five TIA Patients Go on to Stroke, Even in Current Era | Nutrition Fit 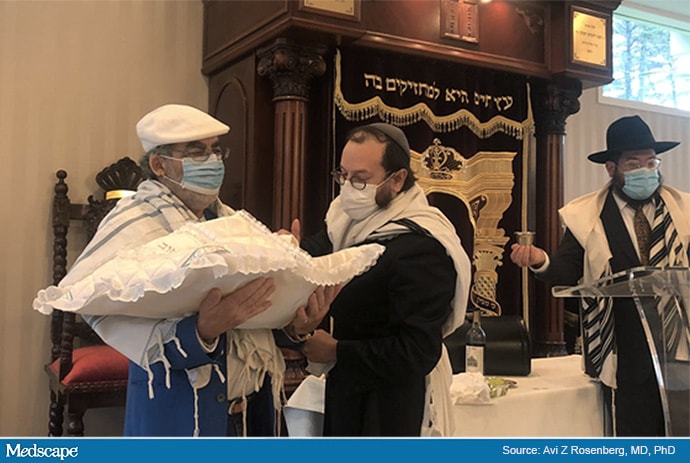 Avi Z. Rosenberg, MD, PhD, is shown here in his role as a mohel at a bris that follows COVID-19 protocols.

In describing the role he and other doctors play in these communities, Rosenberg says the job can extend beyond just offering medical rationale. “Part of this has been social work at a community level. We’re helping families to not be too disappointed by the fact that the in-person participation in the ceremony is curtailed by stressing the intimacy of the event and making it an opportunity rather than a challenge and a limitation.”

Ditchek notes, “Most families have an average of two kids. In the Jewish community, the average is four or five. We had to figure out the safe school protocols early on. It’s not easy, because some classrooms have 30 to 35 kids or more.”

Doctors working within Orthodox Jewish communities insist that adherence to pandemic guidelines has generally been good. However, occasional instances of rule-breaking have made big splashes in the news. These include incidents such as the crowded funeral of a prominent Brooklyn rabbi who died of COVID-19 in April and subsequent outrage over a tweet from New York’s Mayor Bill Deblasio criticizing “the Jewish community.” In November, a large, crowded wedding — also of a prominent Brooklyn rabbi — was conducted in secret. News of the wedding was subsequently leaked to the press.

Ditchek says, “Bad press interferes with good press.” Although he does not excuse inappropriate behaviors, he points out that members of the Jewish Orthodox community are no more culpable than other groups. “Clearly, every community in the US has had challenges with people complying with mitigation efforts. Our community was featured much more openly than certain other communities.”

Many of the more positive responses of the community to the pandemic have received less attention, Ditchek says. “When hospitals were asking for plasma donations, the largest plasma drives were in the Jewish community. The community came together and put their plasma together for everyone, not just Jewish people.” He points to other accomplishments that were not as well covered. “We were the first community to distribute pulse oximeters, nasal cannulas, and oxygen concentrators on a mass scale to hospitals in high-needs areas here in the city.”

Between March and May, when New York hospitals were overrun, an organization called Shomrim (“guardians”) of Flatbush delivered 600 to 700 oxygen concentrators to homes. They also organized home visits by paramedics and nurses to train people who had COVID-19 how to use them. As a result, many were able to avoid going to the hospital. Coalition physicians are collecting data on the impact of that program — which reduced overall mortality — and intend to publish the findings.

The coalition works closely with health departments in all their efforts, Rosenberg emphasizes. “In general, when we present to a department of health a clear plan of mitigation, they’re appreciative. It makes their job easier.”

The doctors want to clearly communicate to officials that the few stories of rule-breaking is not indicative of the larger community’s actions. “We’re helping them understand that we’re not running amok,” said Rosenberg. “The stories from Brooklyn are not representative of what we’re trying to do. We really want to do this right.”

Rolling Out Vaccines and Dispelling Misinformation

As a pediatrician, Ditchek has spent years fighting misinformation about vaccines within the Orthodox Jewish community, most notably, the measles vaccine. He has received some pushback for doing so. “I’ve been a target for years because I’ve worked with the health department to make our sure schools are compliant,” he said. “I’m not well liked by the antivaccine community.”

Now, as the COVID-19 vaccine rollout moves forward, he’s preparing for a new phase of that battle. “I think what happened in the Jewish community, unfortunately, is the antivaxxers were able to put out a lot of misinformation,” Ditchek said. “What the antivaccine people have been doing for months now is saying that doctors and the CDC are unreliable.”

A current major misconception about the COVID-19 vaccine in the Orthodox Jewish community is based on misinformation that it impairs fertility. The false notion that the vaccine causes “female sterilization” was based on reports of a shared amino acid sequence in the SARS-CoV-2 spike protein and a placental protein.

“From a genetic standpoint, this is laughable,” said Ditchek. “It’s not factual…. I think we have to focus in the Jewish community on that part of the safety issue with this vaccine. Once people understand that it’s not true, I think we’ll have better adoption of the vaccine.”

The doctors hope that the strategies they have used to this point to encourage disease mitigation will also help with this phase of the pandemic. Glatt echoes Ditchek’s optimism that individuals in the community who hold misperceptions will eventually abandon them and embrace COVID-19 vaccination.

Miriam E. Tucker is a freelance medical journalist based in the Washington, DC, area. She has been a regular Medscape contributor since 2012. Her Twitter handle is @MiriamETucker.

Editor's note: Find the latest COVID-19 news and guidance in Medscape's Coronavirus Resource Center. Hospitals and clinics across the country...