Late one night in early February, Jen Gunter, MD, was scrolling online when she discovered a new “feminine hygiene” product being marketed for teen girls. The new vanilla-clementine-scented wipes and cleansers with confetti-colored packaging and a cute name (OMV!) irked Gunter because they are designed for girls to use to “freshen” their vaginal area. 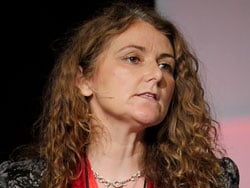 Gunter, a San Francisco-based gynecologist and author of The Vagina Bible, has built a reputation as a fierce advocate for women’s health and debunker of pseudo-science. She has called out jade eggs and “detox pearls” and various other items that promise to improve the vagina, but that she and other doctors warn could actually be harmful. And, in her view, this product is no different.

She fired off a tweet that became the first volley in a vociferous social media counter-campaign:

“Hey @vagisil going to call you out here for this predatory line of products aimed at teen girls. Why do you think teen vulvas need special cleaning? To be prepped for men? Because they are dirty. Anxiously awaiting your answer as are all my followers.”

Hey @vagisil going to call you out here for this predatory line of products aimed at teen girls. Why do you think teen vulvas need special cleaning? To be prepped for men? Because they are dirty. Anxiously awaiting your answer as are all my followers pic.twitter.com/oVQf5XBx71

Vagisil responded on Instagram that “we want to clarify any confusion or the underlying belief that OMV! was developed because there is something wrong with teens or that vulvas/vaginas are inherently dirty. That is not the case. All-Day Fresh Wash is an all-over body wash, that is safe, gentle, and pH-balanced for sensitive vulvar area skin.”

Gunter’s February 4 tweet attracted more than 8300 likes, 1300 retweets and hundreds of comments, but that was just the beginning. Gunter has continued to tweet about the OMV! product-line — and has inspired dozens of other gynecologists to join in.

“Your Vagina Is Fine”

Gunter and other gynecologists have long delivered the message that water alone is sufficient to cleanse the vulvar area, and that the vagina itself is self-cleaning. Research into the vaginal microbiome reveals the role of Lactobacilli in preventing urogenital diseases. “Disturbances in your vagina microbiome are hard to undo,” says Jocelyn Fitzgerald, MD, a urogynecologist and pelvic reconstructive surgeon at Magee-Womens Hospital at the University of Pittsburgh Medical Center, Pittsburgh, Pennsylvania.

To underscore that message, Fitzgerald recently tweeted in support of Gunter’s Twitter thread: “Honestly, the @vagisil marketing campaign is a brilliant one because using their products while your vagina is perfectly fine will destroy your microbiome, give you real Bacterial Vaginosis, and prompt you to buy more Vagisil. DON’T FALL FOR IT GIRLS YOUR VAGINA IS FINE.”

Honestly, the @vagisil marketing campaign is a brilliant one because using their products while your vagina is perfectly fine will destroy your microbiome, give you real Bacterial Vaginosis, and prompt you to buy more Vagisil.

💥DON’T FALL FOR IT GIRLS YOUR VAGINA IS FINE 💥

In an emailed response to Medscape, a Vagisil spokesperson said, “We follow industry-best practices for testing and OMV! products are rigorously assessed for safety and quality. In addition, we work with respected, independent clinical labs that follow strict testing protocols, using board-certified gynecologists and dermatologists to test our products before launch.”

However, beyond the potential for irritation or misuse, the gynecologists zeroed in on the underlying message that girls would feel more confident if they used the wipes and cleanser. For example, the company suggested that teens could use the wipes to get rid of “period funk.”

“There is no such thing as period funk!” gynecologist Danielle Jones, MD, exclaimed in a video on YouTube, where she has a channel called Mama Doctor Jones — with 700,000 subscribers. “All you need is ordinary hygiene. Period funk is not a thing! And if you feel like something is going on because there’s an odor that is abnormal, you need to talk to your doctor.”

When it launched OMV! in July, Vagisil said it had engaged 2500 teens and their mothers in creating the product, which it said was “designed to meet the cleansing and care needs of a new generation of young women.”

That extension of a product most commonly used by adult women to teenagers — who often feel self-conscious about their bodies — is exactly what bothers Gunter. “BTW I am sorry I am subjecting you all to my @vagisil outrage, but preying on teens and amplifying patriarchal shame of normal bodily functions to sell an irritating product is not acceptable. I’m not stopping until they take that OMV! product line down everywhere,” she said in a February 8 tweet that attracted more than 7900 likes.

No “Glow Up” Needed

Gunter’s tweets tapped into collective anger over the shaming of women’s bodies. The OMV! marketing suggested that teens could get a “glow up” with the products.

Gunter says she specifically wanted to prevent Vagisil from leveraging social media to influence teen girls. With her stream of tweets and support from colleagues around the country, she has sparked a prolonged online conversation.

“I am encouraged by the strong response on social media from both other enraged ob/gyns and healthcare professionals as well the response from a lot of women and men,” Gunter told Medscape Medical News. “We have effectively blocked [Vagisil] from using social media.”

In its response to Medscape, Vagisil noted “We are a brand run by women with daughters of our own.” While defending the products, Vagisil acknowledged the criticisms: “We are always listening to our consumers and our expert partners so that we continuously evolve. We appreciate the perspective that our language choice surrounding periods may perpetuate an old idea, and have already begun to make changes to address this.”

Gunter says she plans to stay on topic. “Given the number of people outraged, I suspect if they venture out on social media again the reaction will be swift,” she said. “Hopefully we have made OMV! toxic for influencers as well.”

In fact, she’s ready to take on “the entire predatory feminine hygiene market. I’m sick of their false claims about balancing pH and not-so-subtle suggestions that vaginas and vulvas and menstruation stink. These products cause psychological harm as well as physical harm from their irritants,” she said.

A systematic review and meta-analysis of 10 randomized controlled studies concludes that use of convalescent plasma in COVID-19 patients doesn't...